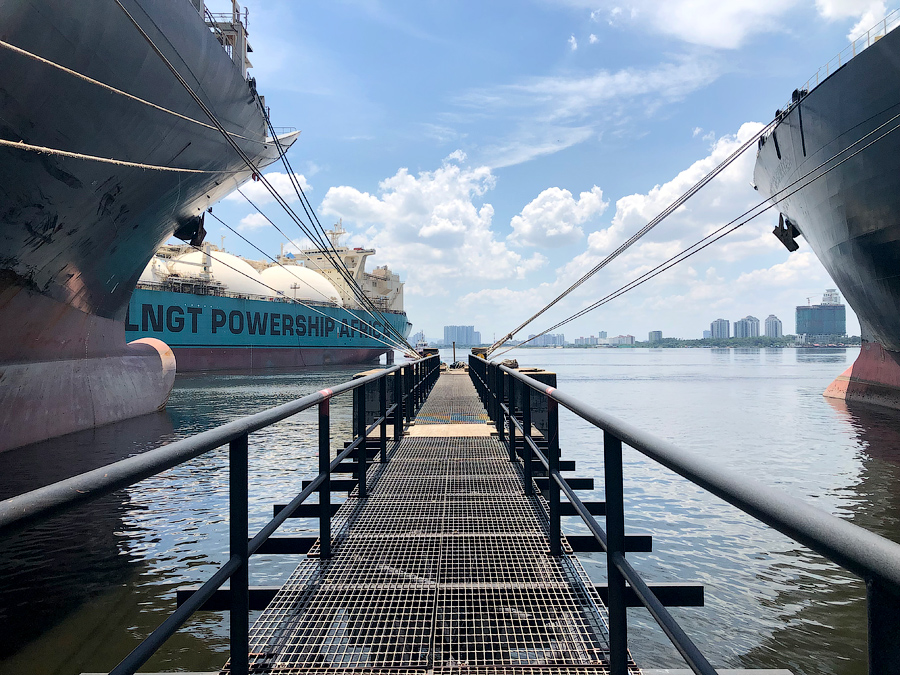 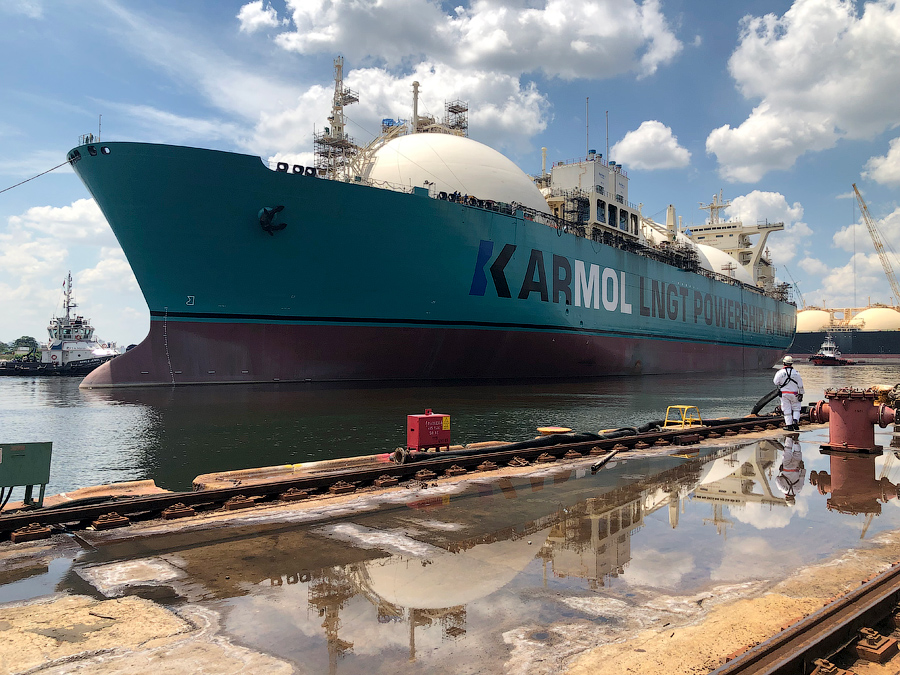 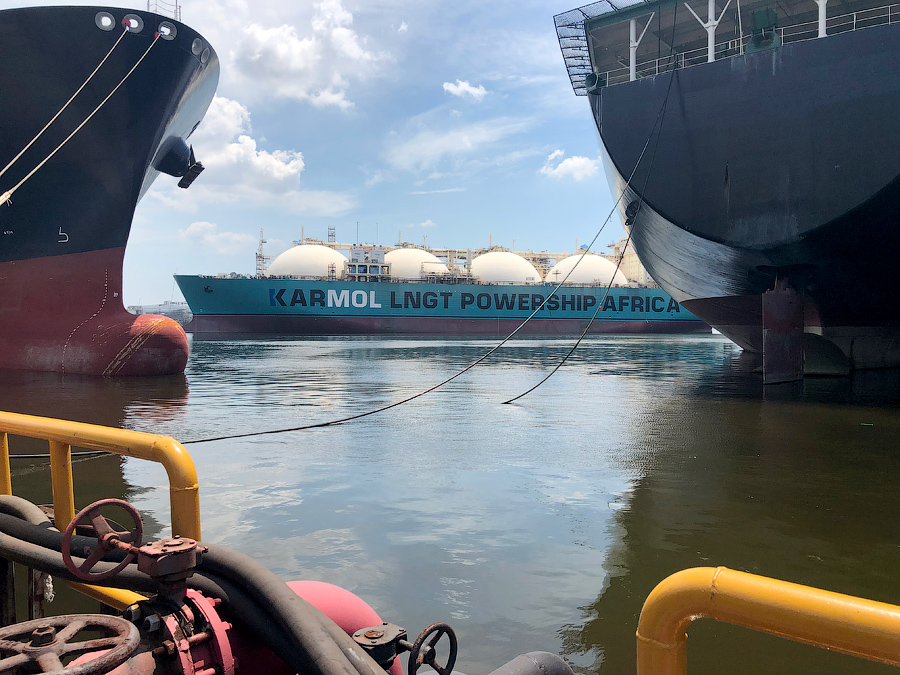 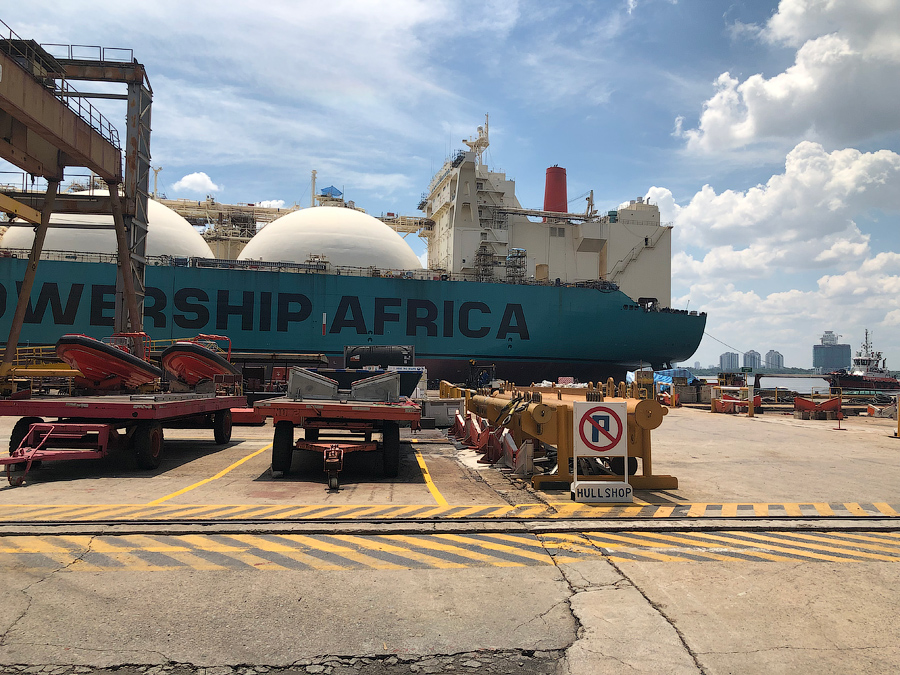 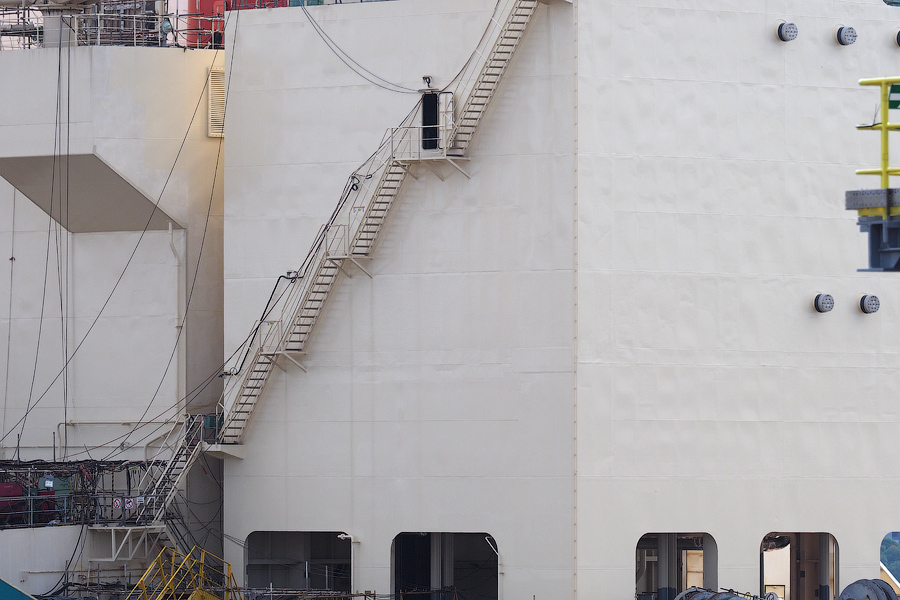 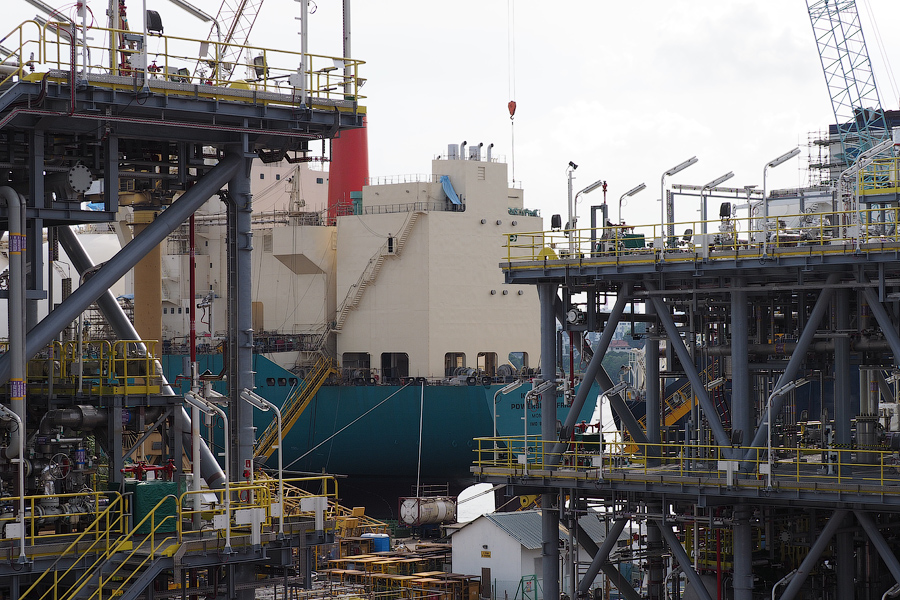 A first floating storage and regasification (FSRU) unit for the MOL-Karpowership joint venture, Karmol, is set to deliver to Senegal early in 2020. The Liberian-flagged Karmol LNGT Powership Africa will soon undertake gas trials off Singapore, following its conversion at Sembcorp Marine, before heading to West Africa.

MOL and Karadeniz-controlled Karpowership formally announced their partnership on LNG-to-floating power in March. The design envisages LNG being delivered to an FSRU that then supplies gas to a Karpowership unit, which sends power ashore.

The MOL-Karpowership partnership is expected to be first to put an LNG-to-floating-power project into operation.

----
MOL and Karpowership announce the first LNG-to-Powership project under the co-brand "KARMOL" to be delivered in Nacala, Mozambique

TOKYO-Mitsui O.S.K. Lines, Ltd. ("MOL", head office: Minato-ku, Tokyo; President & CEO: Junichiro Ikeda) )(*1) and Karadeniz Holding A.S. ("Karadeniz"; head office: Istanbul, Turkey; Chairman: Osman Murat Karadeniz)(*2) today announced that MOL and Karpower International B.V. ("Karpowership"; head office: the Netherlands; CEO: Orhan Remzi Karadeniz), a subsidiary of Karadeniz, have agreed to jointly carry out the first LNG-to-Powership project under the co-brand "KARMOL" (*3) in Mozambique and for this purpose jointly own and operate a FSRU (*4) and a Powership® (*5). Ahead of this announcement, MOL and Karpowership jointly made presentation in TICAD Ⅶ (*6) conference where MOL and Karpowership introduced concept of LNG-to-Powership solution and outlines of Mozambique Project.

This LNG-to-Powership project consists of the collaborative operations of the FSRU to deliver regasified LNG and the Powership® to receive regasified LNG in order to produce electricity, which is subsequently provided to Electricidade de Moçambique ("EDM"), the Mozambican National Power Utility, through the electricity connection and transmission facility. As already announced in our press release dated 29th March 2019, the FSRU is now being converted from an existing LNG Carrier. The Powership is currently operating with heavy fuel oil in Nacala, but in accordance with the prior arrangement with EDM, it will be switched to operation with LNG after the FSRU delivery. Remarking on the project Max Tonela Minister of Mineral Resources and Energy of Mozambique, said "This project contributes to our national strategy of increasing the availability and reducing the costs of fuel to generate electricity for industrial development and energy access. This project does it through LNG, a critical fuel for Mozambique's future".

In the past years Mozambique has seen rapid economic growth, which in order to sustain requires the increased supply of stable and affordable supply of electricity. KARMOL's LNG-to-Powership solution with power generation capacity of 120MW will create a stable and reliable supply of electricity for the people of Mozambique and, provide critical infrastructure for the use of LNG within Mozambican territory. When completed, the project will be the first LNG -to Power solution and FSRU project in Eastern and Southern Africa.

MOL and Karpowership will continue to jointly develop LNG-to-Powership projects and provide cost competitive and robust solutions in all over the world. 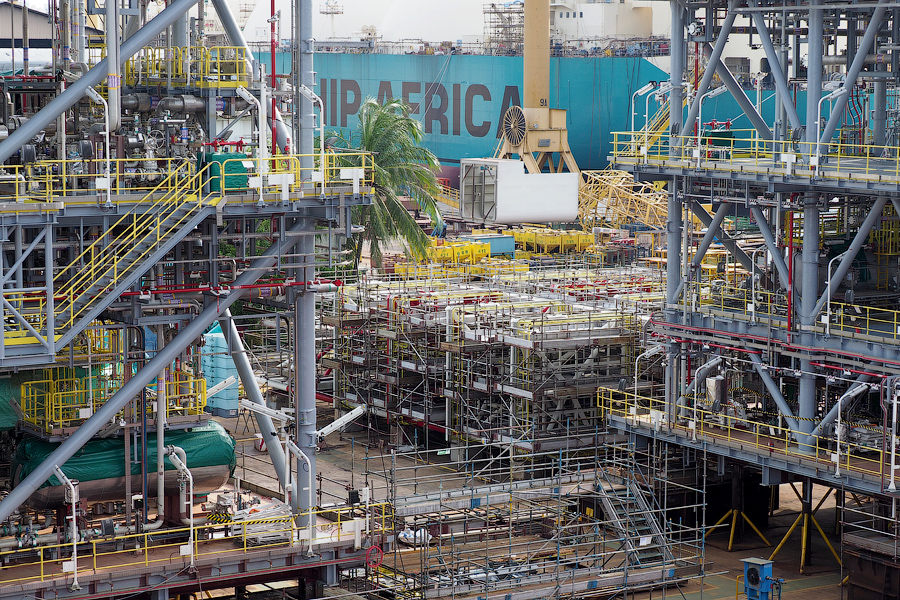 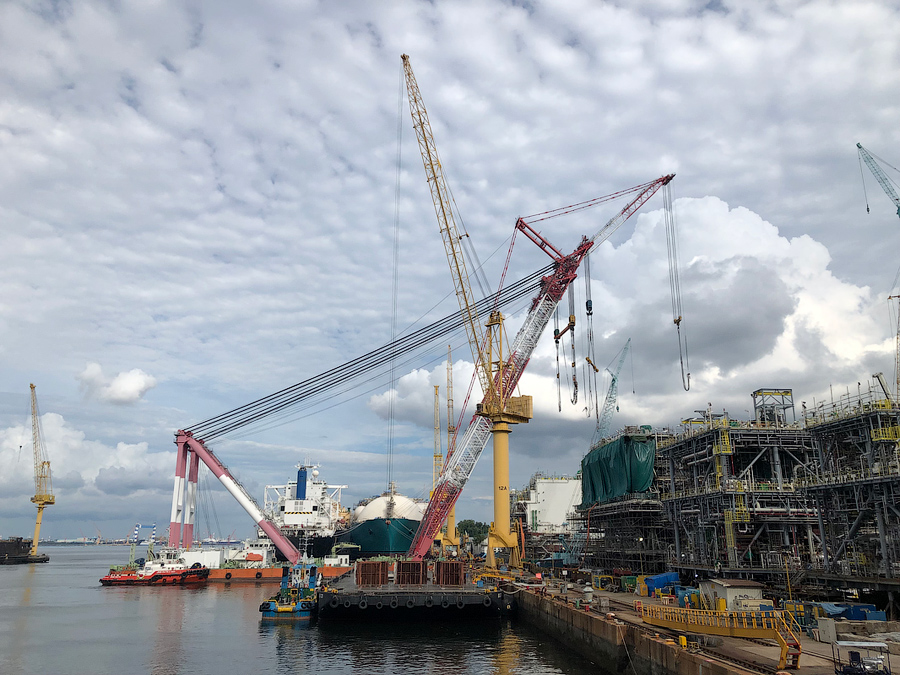 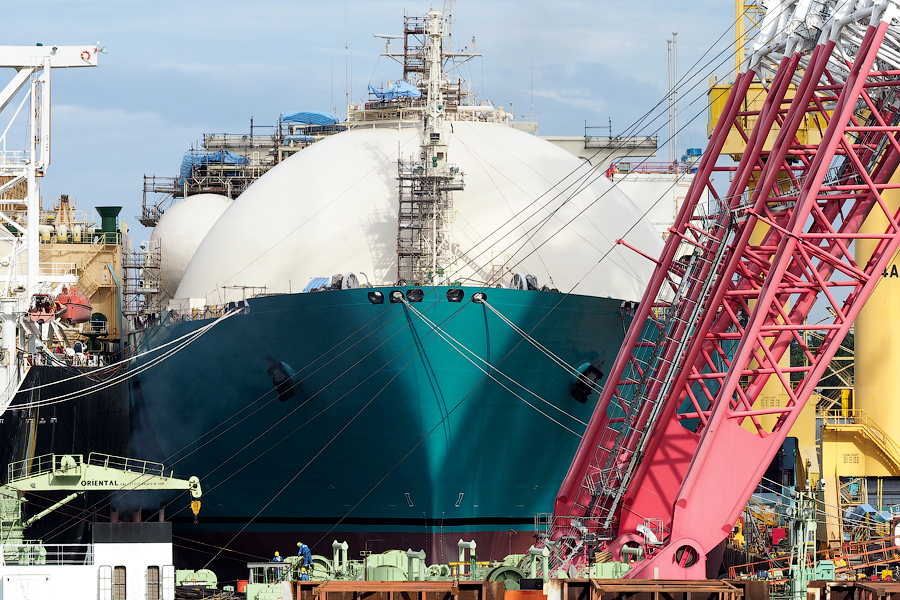 Recent Posts from This Journal

Recent Posts from This Journal